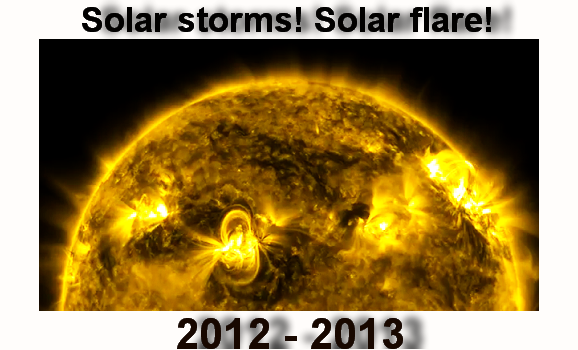 Cities blacked out for up to a year, $2 TRILLION of damage - with a 1 in 8 chance of solar 'megastorm' by 2014, experts explore the worst that could happen
• If earth is hit by the same force as the worst recorded solar storm in history, 1859's Carrington Event, it would be devastating
• Magnetic force could disrupt global communications and take out power sources, with huge financial consequences
• The sun is entering a two-year period of increased activity, with a peak due before 2014
By Martin Robinson and Rob Waugh
2nd March 2012 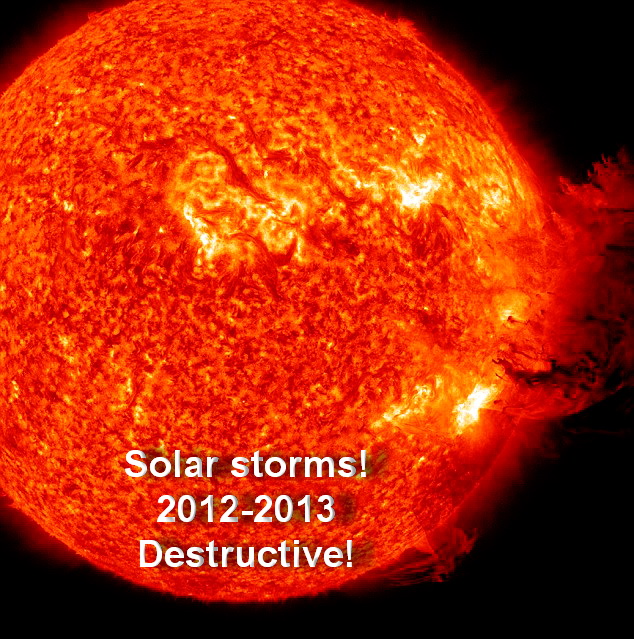 Destructive: Scientists fear that the sun could be starting a 'hurricane season' of solar storms set to peak within the next two years.
There is a one in eight chance of a solar 'megastorm' before 2014, according to a Californian scientist - and other space weather experts agree that Earth is facing a burst of violent activity that will peak within two years.
It's unknown what effects this could have on our planet - but scientists have analysed the worst recorded solar event in history, 1859's Carrington Event, and worked out what effects a similar event would have now. 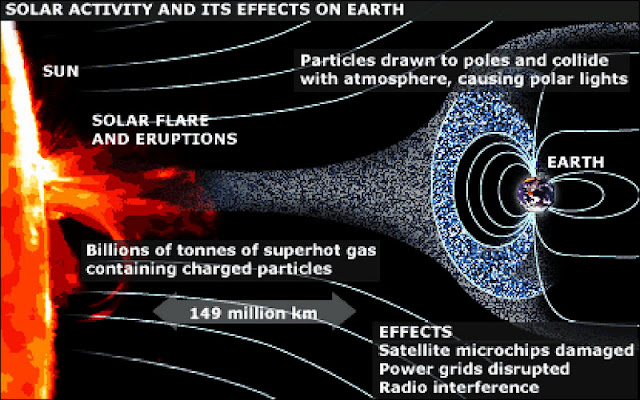 In our connected, satellite-reliant electronic age, the effects would be devastating, they say, as it would disrupt global communications and take out power sources, and could cause up to $2 trillion of damage.
They fear the sun could now be entering a two year 'hurricane season' of solar storms, and the star flared violently on Valentine's Day this year.

'We live in a cyber cocoon enveloping the Earth. Imagine what the consequences might be,' Daniel Baker, of the University of Colorado's Laboratory for Atmospheric and Space Physics told National Geographic when asked about a potential 'megastorm'.
'Every time you purchase a gallon of gas with your credit card, that's a satellite transaction.
'Imagine large cities without power for a week, a month, or a year. The losses could be $1 to $2 trillion, and the effects could be felt for years.'
More...Stolen Nasa laptop 'contained the codes to control the International Space Station' Astronomers find life on Earth: Reflected 'earthshine' on moon reveals 'biosignatures' which could lead us to life on other worlds 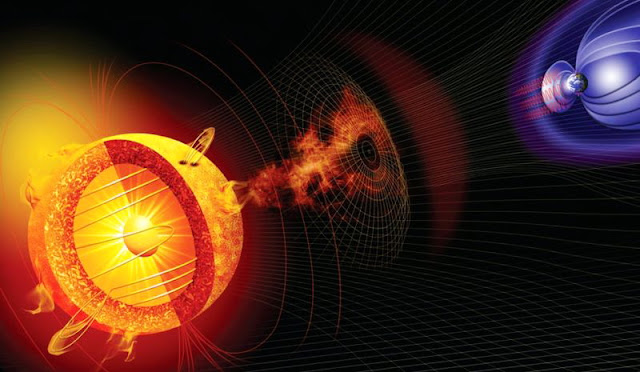 The sun has a storm cycle of around 12 years, known as a solar maximum, and as this period draws to a close it generally peaks with a series of intense storms.
The sun's last solar maximum was in 2000 so it should happen in the next year or two.
It could be these storms rival the infamous Carrington Event of more than 150 years ago, when telegraph stations caught fire and their networks suffered massive black-outs.
'The sun has an activity cycle, much like hurricane season. It's been hibernating for four or five years, not doing much of anything,' said Tom Bogdan, director of the Space Weather Prediction Center in Boulder, Colorado.

'Now the sun is waking up. The individual events could be very powerful.'
During the Carrington Event the northern lights were seen as far south as the Caribbean, while in America you could read a newspaper just from the light of the aurora. 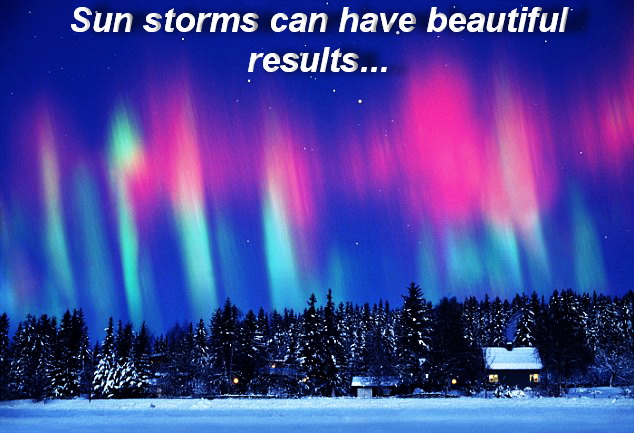 Highly charged: Sun storms can have beautiful results, such as this aurora over Norway, but a gigantic flare could wreak havoc with our electrical systems
Pete Riley, a senior scientist at Predictive Science in San Diego, California, says there 12 per cent chance of being struck by a solar megaflare.
'Even if it's off by a factor of two, that's a much larger number than I thought,' he told Gizmodo after publishing his estimate in Space Weather on February 23.
More...Stolen Nasa laptop 'contained the codes to control the International Space Station' Astronomers find life on Earth: Reflected 'earthshine' on moon reveals 'biosignatures' which could lead us to life on other worlds
Low-intensity solar flares are quite common and can be readily seen in the form of auroras, light displays caused by the collision of charged particles with the Earth's atmosphere.
But the cost of a Carrington Event-type storm striking the planet could range anywhere from $1 trillion and $2 trillion in the first year alone, according to a 2008 report from the National Research Council.
'A longer-term outage would likely include, for example, disruption of the transportation, communication, banking, and finance systems, and government services,' the NRC report said, it was reported on Gizmodo.
'It could also cause the breakdown of the distribution of water owing to pump failure; and the loss of perishable foods and medications because of lack of refrigeration.'
http://www.dailymail.co.uk/sciencetech/article-2109302/Cities-blacked-year--2-TRILLION-damage--1-8-chance-solar-megastorm-2014-experts-explore-worst-happen.html
UK scientists to help satellites dodge sun storms
Fri, Mar 2 2012; By Ethan Bilby
LONDON (Reuters) - British scientists have developed a system to help protect navigation and communications satellites from potentially devastating solar storms,
they said on Friday. 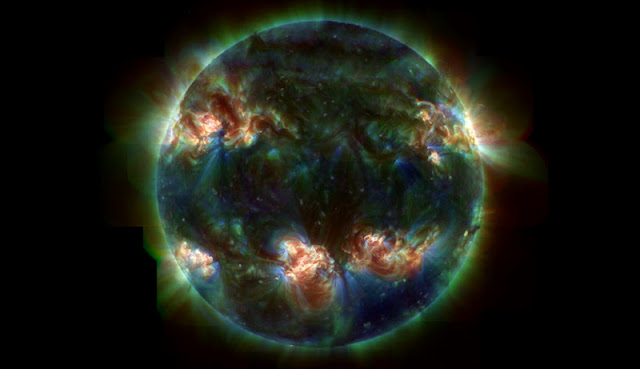 Services spanning everything from mobile phones to sophisticated weaponry increasingly depend on global positioning system, or GPS, technology. However damage by a massive burst of solar energy could knock out GPS satellites and send them veering into the paths of other craft or scramble their communications. 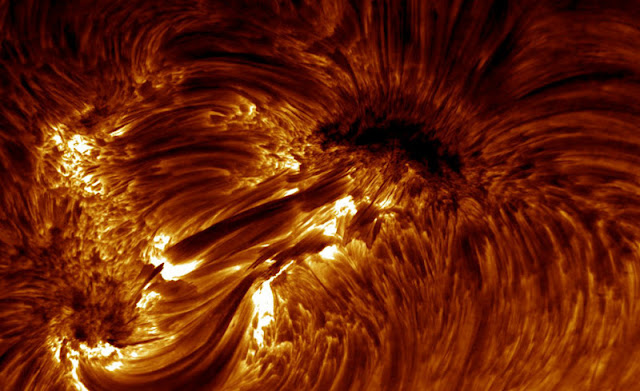 Led by a team from the British Antarctic Survey (BAS), researchers from six European countries will use satellite data and ground-based measurements of the earth's magnetic field to forecast changes in radiation. That will allow them to alert satellite operators of a sudden increase in dangerous particles and give them time to move the craft out of harm's way, power them down or fold sensitive wings away. 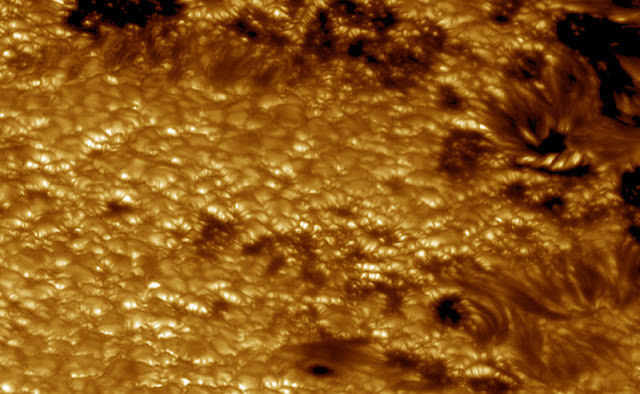 "For the first time, we can now forecast radiation levels for a whole range of different orbits, from geo-stationary to medium earth orbit where there is a tremendous growth in the number of satellites," said BAS researcher Richard Horne, who led the project. "Nobody has done that before."
GPS satellites are particularly vulnerable because they orbit closer to the earth, passing through the Van Allen belt - a magnetic field that surrounds the planet and a troublesome source of radiation for satellites at all times.
"We know that the radiation levels there are much higher than in geostationary orbit, but they're still subject to big changes and we have a lot less information on those medium earth orbit locations," Horne told Reuters.
STORM BREWING
The tremendous growth in GPS system satellites from many countries, including Europe's Galileo, means that monitoring near-earth space has become increasingly important.
The risk of storms is growing. The 11-year activity cycle of the sun is set to begin a peak of stormy activity in 2012-13, making forecasting all the more important.
Though solar radiation can take a day and a half to travel from the sun to the earth, the new system will still only be able to give satellite operators a few hours notice of a storm thanks to data from a relatively distant NASA satellite,
1.3 million km (800,000 miles) out in space.
The price of the 2.54 million euro (3.39 million dollar) system is tiny compared to the loss of even just one satellite.
A repeat of a "superstorm," like that seen in 1859 would wreak an estimated $30 billion of damage to satellites alone, according to government-funded BAS.
In 2003, a geo-magnetic storm caused more than 47 satellites to go haywire and led to the loss of one satellite valued at $640 million.
Commercial operators are cagey about just how vulnerable their satellites are to solar storms, but a spokesman for Virginia-based satellite manufacturer Orbital Sciences Corporation said such storms were a well-known concern.
"Space weather of course is a contributing factor to long-term satellite performance," said spokesman Barron Beneski. "If there is a new tool that would probably be welcome."
An Orbital satellite attracted attention in 2010 when it failed and remained unresponsive for months, a malfunction the company said could have been caused by space weather.
http://www.reuters.com/article/2012/03/02/us-britain-solarstorms-idUSTRE8211EQ20120302