Japan’s earthquake shifted balance of the planet. Why did the quake shorten the day?

Mon Mar 14, 9:56 am ET
Japan’s earthquake shifted balance of the planet
By Liz Goodwin
Last week's devastating earthquake and tsunami in Japan has actually moved the island closer to the United States and shifted the planet's axis.

The quake caused a rift 15 miles below the sea floor that stretched 186 miles long and 93 miles wide, according to the AP. The areas closest to the epicenter of the quake jumped a full 13 feet closer to the United States, geophysicist Ross Stein at the United States Geological Survey told The New York Times. 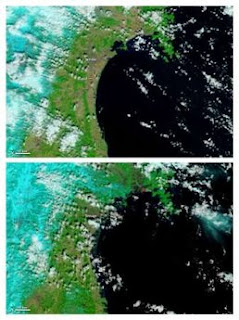 The world's fifth-largest, 8.9 magnitude quake was caused when the Pacific tectonic plate dove under the North American plate, which shifted Eastern Japan towards North America by about 13 feet (see NASA's before and after photos at right). The quake also shifted the earth's axis by 6.5 inches, shortened the day by 1.6 microseconds, and sank Japan downward by about two feet. As Japan's eastern coastline sunk, the tsunami's waves rolled in. 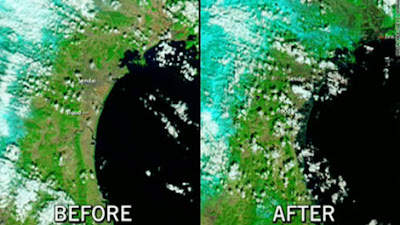 Why did the quake shorten the day?  The earth's mass shifted towards the center, spurring the planet to spin a bit faster. Last year's massive 8.8 magnitude earthquake in Chile also shortened the day, but by an even smaller fraction of a second. The 2004 Sumatra quake knocked a whopping 6.8 micro-seconds off the day.

After the country's 1995 earthquake, Japan placed high-tech sensors around the country to observe even the slightest movements, which is why scientists are able to calculate the quake's impact down to the inch. "This is overwhelmingly the best-recorded great earthquake ever," Lucy Jones, chief scientist for the Multi-Hazards project at the U.S. Geological Survey, told The Los Angeles Times.

The tsunami's waves necessitated life-saving evacuations as far away as Chile. Fisherman off the coast of Mexico reported a banner fishing day Friday, and speculated that the tsunami knocked sealife in their direction.

(An energy map provided by NOAA shows the intensity of the tsunami caused by Japan's earthquake: Reuters/NOAA. Below, Satellite image of Japan's coast moving: NASA.)

CORRECTION: This article originally attributed Lucy Jones' interview to the The Boston Herald. 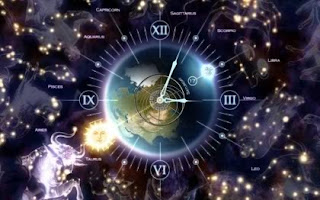