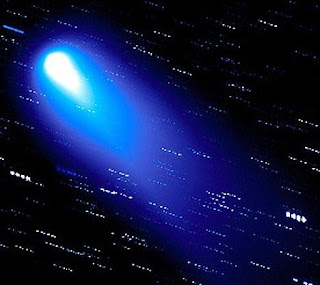 Special Note
Ask an Astrobiologist has received more than 5000 questions about Nibiru and Doomsday 2012, with more than 400 answers posted. Please read a summary of the answers that have already been posted, view a video on these topics, use the search feature and read the FAQ’s before submitting questions on these topics. 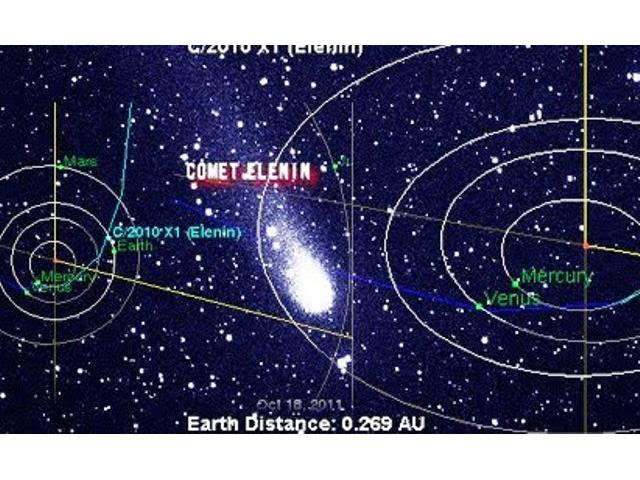 Question
So what the deal with comet elenin, there does not seem to be too much credible information. Everyone seems to be freaking out about it, but no one even knows how big it is. Does this comet pose a threat and what is its size and nature? AND I have read about comet Elenin and how some nasa people want to keep it a secret. what are the chances of it coming to earth and what threat does it bring with it, and has this comet got anything to do with 2012 hoax? AND Elinin is only .117 au from earth on mar 11,2011. From march 8 to mar 15, 2011, what are the chances that Elinin either impacts us, or gets close enough to cause a major catastrophy.
Please be honest. 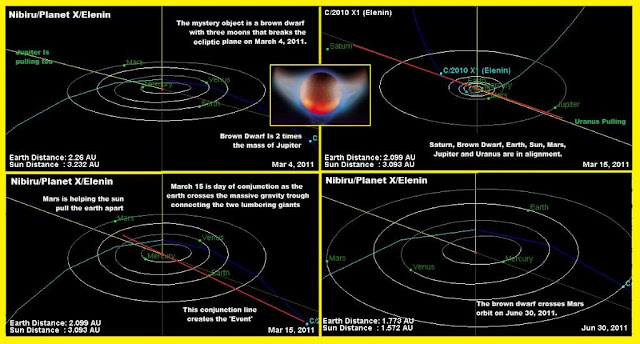 I have been receiving many questions about Comet Elenin. Many of them refer to the outrageous lies on some conspiracy theory websites, which are amplified by people who seem to think this comet is highly unusual. It is not unusual, and it is not a threat to Earth. See the Wikipedia article on this comet [http://en.wikipedia.org/wiki/C/2010_X1] for more information. C2010 X1 Elenin (to give its full name) is a long-period comet, which takes about 10,000 years to complete one orbit around the Sun. It was discovered with a robotic telescope in New Mexico on 10 December 2010 by Russian amateur astronomer Leonid Elenin. When comets or asteroids are first discovered, their orbits are quite uncertain; usually it takes several months of observations to firmly establish the orbit. Elenin's perihelion (closest to the Sun) is in early September 2011 at a distance from the Sun of 40-45 million miles. It will be closest to Earth on about 16 October, at a distance of about 21 million miles, which is nearly a hundred times farther than the Moon. The comet never comes close to the Earth, but it is expected to be visible in binoculars during August and October. Part of the Internet chatter concerns its size. Comets are exceedingly small and enveloped in a tenuous cloud of gas and dust, so the only way to be sure of their actual dimensions is to visit with a spacecraft. Half a dozen comets have been the target of spacecraft missions, and all of them (even Comet Halley) are less than 10 km in diameter. There is no reason to think Elenin is any different. This means its mass is less than one billionth the mass of the Earth. Needless to say, we will not be aware of the tiny gravitational pull from Elenin. In spite of these simple facts, some websites (such as godlikeproductions) are making wild claims that Elenin will hit the Earth, or disturb our orbit, or cause tides, or interact with our magnetic field. Such claims are pure fiction. One of the worst examples is a video that someone posted on the NASAbuzzroom website that claims that the magnetic field of the comet will cause a large shift in the rotation axis of the Earth and produce mega-earthquakes on March 15, 2011. It is hard to imagine anyone would take this seriously. Comets don't have magnetic fields, and magnetic fields can't change the rotation axis or cause earthquakes no matter how large they are. Adding to the craziness is a claim that this same comet caused the Earth's axis to shift by 3 degrees in February 2010 and caused the Chile Earthquake. These are simply lies; the comet was far away a year ago, and there was no change whatever in Earth's rotation axis. The Chile earthquake was a normal slippage in an active fault that has produced many previous earthquakes, including the one witnessed by Charles Darwin in 1835. Please remember that just because someone says he or she is from NASA doesn't make it true. Many people who post YouTube videos lie about their affiliation. Incidentally, only NASA is allowed to use the NASA logo, the blue circle with the word NASA and a satellite orbiting around it.
David Morrison
Astrobiology Senior Scientist
March 1, 2011